A Fishfinder for Every Situation

Lowrance offers four series of best-in-the-industry fishfinders and fishfinder/chartplotter combos, satisfying the needs and budgets of both weekend anglers and touring professionals. Basic fish-finding needs are met by the HOOK² series. The widescreen Elite Ti² units with intuitive touch-screen capabilities are a step up in performance with the easy-to-use, high-definition HDS Carbon offering additional functions and features. For serious anglers, the top-of-the-line HDS LIVE is equipped with the best set of navigation tools ever built into a fishfinder/chartplotter display, including built-in Lowrance® CHIRP sonar, support for Active Imaging™, StructureScan® 3D with Active Imaging and revolutionary LiveSight™ Real-Time Sonar. 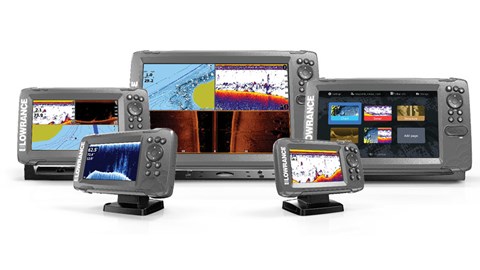 Over 60 Years of Electronics Technology

The HOOK² Series of fishfinders and fishfinder/chartplotter combos boasts easy to use features and functions, only normally found on high-end fish-finding gear, and all at prices that are easy to afford.

Featuring support for Active Imaging™ and FishReveal™. Elite-7 Ti² fishfinder/chartplotter is big enough for use as standalone display , but has a small enough footprint to be a perfect fit for boats with limited console space.

INFORMATION NOTICE: COOKIES. We use cookies to enhance your user experience, measure audience and improve the quality of our services . By continuing to browse our services, you accept the use of these cookies. For more details or to change your cookie settings: