Clear as Crystal with HDS Live 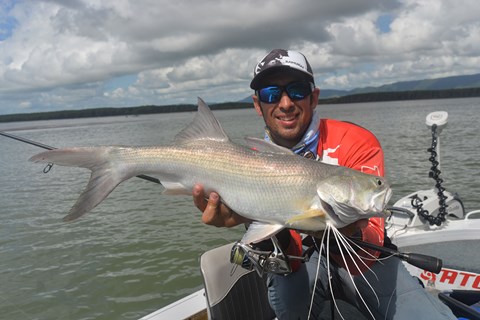 There is no denying that the world of marine electronics is constantly evolving beast and recent Lowrance innovations have been mind-blowing to say the least. It truly is amazing that once upon a time, a fish was represented as an arch on the screen and we were pretty chuffed about that.

Fast forward to 20 years and now the same exact characteristics of the fish are displayed with such an amazing clarity that the species of the fish is clearly identifiable. A barramundi’s arched shoulders, a king threadfin salmon’s large forked tail and pectoral fins, for example, are depicted just as they would be if they were viewed through a glass window in real time.

A recent estuary trip I made once again highlighted the importance of my HDS Live. It is an essential asset and absolute fish-finding weapon. Contrasts manually set on the unit between 8 and 10 gives good definition every time. It gave a perfect representation of schools of large barramundi held up at different locations within the river.

In screenshot 1, barramundi are clearly visible held up in a small hole. Although this depression in the riverbed is roughly only a metre deep, this change in depth was enough for the barramundi to rest in during the run of the tide. Little variations like this need to be paid attention to when seeking out new ground.

Screenshot 2 also displays a school of barramundi setting up to ambush a school of bait on the bottom. The SideScan clearly shows fish out roughly 10m to the right of the boat as well.

Screenshots 3 and 4 show the importance of running SideScan in unison with DownScan. If traditional DownScan was on its own like in the past, the fish out to the right of the boat in screenshot 3 and to the left in screenshot 4 would not be visible and the angler would most likely cruise straight past this location without stopping to target the fish.

It is worth mentioning that these images were taken using 455kHz and they are still pretty damn impressive. I would usually opt to run 455kHz when I shoot sidescan past 120 feet as it is usually used to shoot greater distances, albeit in less detail. 800kHz traditionally gives greater clarity but spans a shorter distance. If the images were this good in 455kHz, I could only imagine how much better they could have been in 800kHz and I’m kicking myself we didn’t change frequencies. I guess we got excited when we saw the show on the sounder and grabbed the rods immediately.

Okay, so seeing the fish on the sounder certainly cracks the first piece of the puzzle and that is finding the fish in the first instance. This is surely more than half the battle. However, fishing can be frustrating at times as over the next few hours we weren’t able to tempt a strike from the big barra despite throwing everything but the kitchen sink at them, and managed only a small king threadfin salmon that must have been dispersed among the big girls.