Sean Bekkers talks about why he chose the Lowrance Elite Ti²  and walks you through the installation process. Read on. 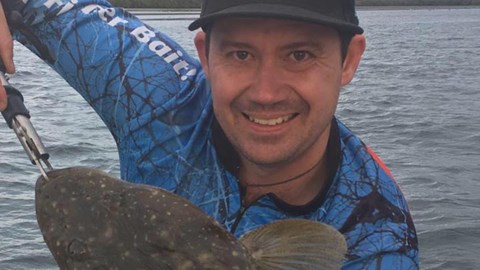 Hi everyone, I’ll give you a quick rundown on myself before I get stuck into the cool stuff. I live in SEQ and am a mad keen fisho. I spend my time chasing anything from flathead in 1ft of water to pelagics and reefies offshore. My trusty platform to cover all bases is my 470 Stessco Tornado tiller steer (open style boat) and after having it for a few years and modifying it to suit my situation, it was time to choose and install and new sounder. So, let me walk you through the things that I took into consideration when selecting and installing a new sounder into my boat.

Over my years of fishing I’ve had the opportunity to use a lot of different sounders and when it comes to parting ways with my hard earned money, I wanted to upgrade to a brand that I have used before and I’ve always been happy with, for me this is Lowrance. Of all the different units that I’ve used over the years, Lowrance just seem have all the functions, pages and buttons in a logical order that is intuitive to use.

Now that I had settled on the brand, it was time to select a model. The sounder that I was replacing was all button and curser controls and not that there is anything wrong with that, however I wanted more screen for my dollars, so the prerequisite was that it had to be a touch screen. Having a touch screen gives you access to all of the functions and with a swipe of the finger the menu disappears, leaving the display to take up the entire screen.

Looking at the top of the range Lowrance HDS with 3D structure scan I was drooling. The 3D scan just looks mint, however it was a little out of my price range and to be honest I probably wouldn’t use the features to their full extent. Instead I settled on the Elite TI2, which met the touch screen criteria and the functionality required, including all of the chart options, side and down imaging, along with networking capability (something that I want to add in later on for all of the engine data). Now, how big should I go?

To be honest it was a tossup between the 9inch and the 12inch screen. The reason I wanted a bigger screen is that I run offshore at night and having a quality unit with detailed chart data is unreal for this style of navigating, especially when your depth perception is affected by the lack of ambient light. It’s worth mentioning that Lowrance’s pre-loaded maps are excellent, with heaps of detail that includes depth contours and stand out features like mooring areas and wrecks. The map is more than ample for me to navigate to my milk run of spots at night.

To aid with my decision I went to BCF and looked at both units. I also became that person that touches all of the buttons and screen menus… and basically sits there and fiddles for an hour. After leaving BCF I was keen on the 12inch and after a quick measure up in the boat I had my heart set on the 12inch Lowrance Elite TI2.

I don’t know about you, but I love getting new stuff for the boat and I’m not going to lie, this was like Christmas. As my boat is an open tiller steer, I don’t have the luxury of a console to hide switch panels, wires, earthing bars and so on. The majority of my wiring is tucked away up under the gunnels, with the switch panel and earthing bar located in the rear casting deck, within arm’s reach.

The head unit itself is mounted on a RAM bracket, allowing me to adjust where it’s located to some degree once installed. It also allows me to pivot the unit forward so that I can see it from the front casting deck. Along with installing my new sounder, I also wanted to give the wiring a general tidy up, checking over the wires, terminals, switches, fuses and so on, for any damage or corrosion. There is nothing worse than fitting new electrical gear and it not performing correctly due to corroded terminals or damaged wires.

After removing the decks, access panels and disconnecting the batteries, the old sounder came out and then I sat down and looked at what I actually had to install. As I have no networking cable at this point in time (maybe later), I really just needed to mount the transducer and run the cable, splice the head unit power cable in and mount the sounder bracket. Pretty simple really.

So, let me take you through a few points that I took into consideration when installing a new sounder. When I was connecting the sounder power cable to the existing wires, I wanted to make sure that the inner conductors of the red and black wires (metal wire bit) were clean. I was checking to make sure that they hadn’t discoloured due to corrosion. If they had corroded I replace the entire length of cable back to the switch panel, as this will avoid trouble down the track due to poor connections and defective wiring.

I have and aircraft avionics background and if I had dollar for all of the problems that I have seen due to poor connections and wires, I wouldn’t be trying to win lotto right now LOL. When terminating the power cable, you can use whatever method you like and the kit that comes with the sounder package has some nice little crimps that can be used for this. For me, I like to make sure the wires are sealed and the connection is free from moisture ingress, so I chose a crimp that has a heat shrinkable sleeve on the outside. There are plenty of these options out there, just follow the instructions for whatever connection you decide to use.

My switch panel has inbuilt fuses, so I didn’t need to do this next step, however if you’re connecting straight to the battery make sure you put the fuse holder in and follow the instruction manual. The idea of the fuse is to protect the wires and sounder from being damaged if the wire chafes through against the hull, metal or even other wires.

Next, I mounted the unit and bracket, ensuring that I had plenty of room to swivel the unit without it hitting anything. This required a bit of fiddling around to get the positioning of the RAM bracket base plate right, however getting it right makes all the difference when on the water. Once that was sorted, I then turned my attention toward mounting the transducer.

The install manual has great install diagrams and I lucked in because the existing holes lined up perfectly with the new transducer bracket, making it a breeze to mount. I didn’t have to take too much time making sure that the transducer was squared up on the boat hull. I added some Duralac, which protects against corrosion due to dissimilar metals, in this case the stainless bracket and aluminium hull. There are plenty of these types of products out there and I would recommend using one of them to protect the aluminium hull.

Now that I had both ends sorted, I worked my way into the boat making sure that I had the ideal area to hide the excess transducer cables and ensure that the sounder head unit cables had drip bends in them. There are two main reason to do this. The first is that it ensures there is no undue pressure put on the plugs themselves, when repositioning the unit, and the second is so that any water the unit is likely to encounter, including rain or spray whilst out on the water, is directed away from the plugs instead of into them.

I’m not going to bore you with a blow by blow account of running the cables; rather that I took my time to make ensure that the wires were routed around all of the hoses and brackets, with the excess hidden away from view. Before putting the boat back together it’s a good idea to reconnect the batteries and check the unit starts up. This really is moment of truth time. Once I confirmed that it powered on and worked, I switched it off and put the boat back together.

Now that I could sit in the comfort of a reassembled boat, it was time for some setting up. The Elite TI2 is simple when it comes to setting up and it literally prompts you the whole way through. Once the main page was displayed the first thing that I did was set up my favourite display, based on what combination I had used in the past. If you’re handy with and iPhone then this is really a follow your nose process that I will go into more detail on in my next article.

Overall, once I had decided on my sounder, the whole install of my Lowrance Elite TI2 unit was super easy and the pre-installed setup within the unit itself means that you can literally complete install, put the boat in the water and go fishing. I’ve been out a few times before writing this article and my first impression of the unit in a word is… STOKED. Stay tuned for my next article, where I touch more on setting up this unit.

Hot Tip: Pull all of your favourite marks out of your old unit before removing it… I forgot.